Ah, the movie Forrest Gump has so many quotable lines, but one that sticks with you the most is when he says, "...life is like a box of chocolates...you never know what you're gonna get."  In so many ways that is true.  That quote not only applies to life, but many other activities as well.

This past week my dad and I went to Red River Gorge in the middle of the night on a quest to photograph the Perseid meteor showers. We knew that we were a day or two past the peak activity, but on the night of peak activity, it was raining buckets around here.  The night we chose was predicted to be clear.  We had some idea of where we would go, and grabbed our gear including camera, sturdy tripod, remote shutter release, flashlights, and of course, plenty of snacks and caffeinated drinks!  We were ready!  I picked dad up around 1:30 am and we drove to Red River Gorge.  The spot we had in mind for our trophy pictures was around the Gladie Cabin historic site.  We hiked in to the grassy field near the cabin and set up.

It didn't take long for us to see that we would not be getting pics of spectacular meteor showers.  The activity just wan't enough.  So we switched gears and decided we would do some star trail pics with the forest line or the cabin in the foreground.  Just as we were getting our technique down and getting some good shots, the stars started to disappear!  Unfortunately, some low lying, dense fog had completely covered our subject.  We waited it out for another hour or so, but it seemed obvious that the fog was there to stay.  So when you are given lemons, what do you do?  Make lemonade!

I told dad that the fog was bad for star trail and meteor pics, but would make our sunrise shots that much more interesting!  We then drove to one of my favorite spots to catch the sunrise.  We had enough time to get there and hike in and get set up.  The spot is near skybridge and is a cliff overlooking the valley.  When we arrived at the pull-off to park it was still dark.  There is a narrow trail, a tenth of a mile, that leads you out to the overlook.  Unfortunately, it is not a real trail, maintained by the park.  It is fairly weedy and knowing that we were in rattlesnake and copperhead country, we tried to make as much noise as possible!  Thankfully we didn't come across any serpents! 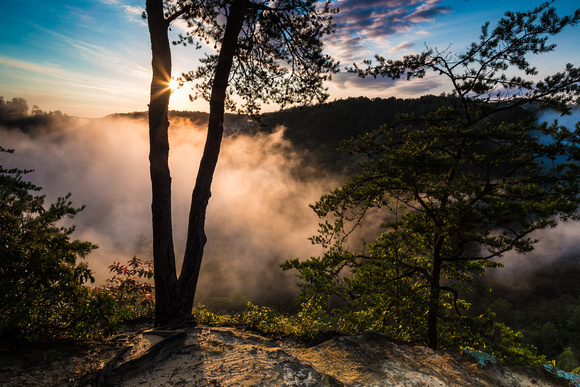 The photo to the right is one of my favorites from the sunrise session there that morning. No, it isn't the meteor shower or the star trails that we had set out to get, but it is one that captures the mood and the essence of the morning.  I knew that we would be shooting the sunrise that morning, and even knew that it may be from this spot.  I had planned that much, but until you actually shoot the shot, you don't know what you are going to get and in that way, photography is "like a box of chocolates!"

For me, that is part of the great pleasure I get from photography, especially landscape photography.  I can plan out a shoot and even imagine in my mind what pics I will want to get.  However, you don't know until you are finished exactly what kind of pics you will end up with, based upon the conditions of light and weather and timing.  It is sort of like as a kid, opening up presents at Christmas...you are excited and know that you will like what's in all of those pretty packages, you just don't know what you have until you actually open them!  So plan out your next shoot and eagerly anticipate what you might "open-up" when you get there!

Until next time...Happy shooting!

Here is my favorite star trail pic that I was able to get before the fog covered the stars: 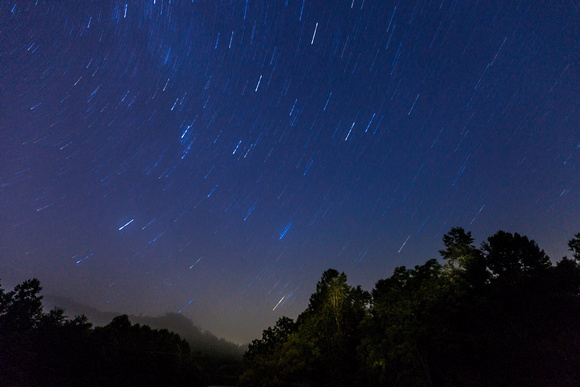 Juanita Jones(non-registered)
So true on the "is like a box of chocolates" - never knowing what you are going to get. I need to start carrying my camera with me daily again as I see so much on my way to work and on my way home that I'd love to capture - sunrises, sunsets, deer in the field - however, by the time I get home - at least at this time of year, it is already dark and the sunsets are gone and it's too dark to capture the deer. I also need to find a bumper sticker that says, "Caution, I stop to take pictures!" Ha ha (It can get risky !)

These two pictures are fantastic. I think if everyone stopped to see the beauty around them like this (as photographers do), life would be sweeter just by taking time to appreciate the beauty around them.
Leigh Ann(non-registered)
So true!! I love this!
No comments posted.
Loading...
Subscribe
RSS
Recent Posts
Hunting Season Back on the Trail!!! Most Important Equipment for this Shot... Cure For the Winter Blues Take Me There Farmland Grandeur What's in the Rear View? Chance Favors the Prepared Reminders From Above Photography..."is like a box of chocolates!"
Keywords
autumn colors fall foliage hunting kentucky season
Archive
January February March April May June July August September October November December
© Rick Scalf Gallery
Powered by ZENFOLIO User Agreement
Cancel
Continue