In early July we were on vacation in the Canadian Rockies. Wow, what a beautiful place that is! We flew into Calgary and then drove to Banff and toured Banff National Park and the Lake Louise area. We then drove up the Icefields Parkway with our most northern destination being Jasper and Jasper National Park. We headed out one morning, after the hotel breakfast buffet, to do some hiking in a canyon area that had a wonderful mountain stream and multiple waterfalls. We spent the morning hiking on a trail that paralleled the stream and experienced a fair amount of change in elevation. After working our way back up, we had worked up a hearty appetite and had lunch at the visitors center.

Our plan for the afternoon was to head out north of town along a road with a series of beautiful mountain lakes. Initially, that was a great plan as the weather was wonderful - bright sunshine and temps that were not too hot.  We were having a very relaxing drive, stopping along the way at each lake. The lakes there are gorgeous, each with their own tint of turquoise and blue. The kids were having the time of their lives - skipping rocks off the shore and occasionally throwing in a large "boulder", seeing who could make the biggest splash! Our destination was a lake near the end of the drive where you could take a ferry boat out to a beautiful island on the other side of the lake. I was looking forward to it, as it is a very picturesque place! However, just as we pulled into the parking lot, it began to sprinkle the rain. Then a little harder...then a slow steady rain, the kind that usually sticks around for a while. 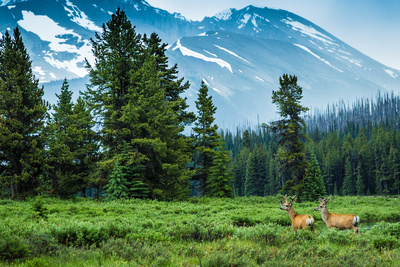 Some of our crew needed a potty break and Dad decided to catch a couple of "zzz's" in the car. Me, well, I know that some of the best pictures are taken right before or right after stormy weather moves through, so I told the "potty breakers" to meet me down near the lake's edge when the rain stopped. I grabbed my camera and headed out. I was able to catch several good shots as I stood under some trees to get shelter from the rain. However, I just wasn't getting a shot I truly loved. Then, as I was looking around for my next shot, I noticed two deer coming out of the woods into an open field close to the water's edge. This was my shot! I slowly moved closer, being careful to not spook them. The rain had tapered off to a soft mist. I got as close as I dared to not scare them away and took a series of shots. You can see one of my favorites on the right and a couple of others in the "O Canada!" gallery. As I was standing there in the moment, I was thinking of a close friend of mine. He is a "man's man" and true lover of the outdoors and hunting. I was thinking that he would love to be there seeing what I was seeing too. Funny thing is, a few weeks after posting the gallery on this site, his wife decided that one of the shots reminded her of him too. It is now framed above their mantle. When she picked it out as a gift for him, she had no idea that I had thought of him while I was shooting it! Great how that worked out!

As it seemed that the rain would be sticking around off and on, we decided to head back into town and catch an early dinner and then the rain might have time to move out. We were hopeful that we could catch a nice sunset later that evening. It was my parents' turn to pick where we would eat. Dad said that there was a place he had seen advertised that sounded great. So we drove back into Jasper and found his choice. There was no parking near the restaurant, so I dropped everyone off and searched for a parking space. I ended up having to park a few blocks away. As I was getting out of the car I thought, "is there really any need to take my camera?" I nearly left it in the car, but thought I may want to snap a few shots around the town between there and the restaurant. I didn't take any before I got there. Everyone was seated when I arrived. My dad was pretty disappointed as they had come to the realization that this place was Jasper's version of Denny's. I was fine...bring on the pancakes! 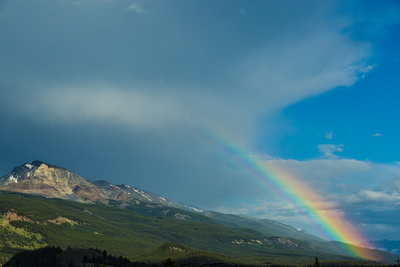 After dinner as I was headed back to the car I was SO glad I had actually brought my camera to dinner with me. I turned the corner and looked out to the east of town and saw one of the largest rainbows I have ever seen! It was perfectly positioned on a hill of green vegetation headed up to a mountain. I was so happy that I not only had my camera, but also had my polarizer on the lens to really capture the vibrant colors!

So what were the chances that I would see this beautiful scene? Well, I don't know, but I certainly could not have captured it if I had left my camera in the car. What were the chances I would see the two deer "posing" in front of the mountain? Don't know, but would not have captured it if I had let myself get rained out. So...chance (whatever that may be) favors the prepared. As Louis Pasteur said, "Chance favors the prepared mind." What are you prepared to do today?

Until next time...Happy Shooting!